The Festival (River Bourgeois Days) began in 1978 the year the Community Hall (now the Tara Lynne Center) was built.

Opening Night for the last thirty-four years has been comedy night. We have also seen men’s and women’s fashion shows, a “Fifty years of wedding dress” show, “River Bourgeois has talent” show, beauty pageants, and many comedy skits. We have also had a salute to our veterans and much more.

Lob ball teams have competed in a tournament since the inception of the festival.
Other events that have occurred since the beginning are: Men’s Breakfast, pot luck suppers, beer gardens, merchandise bingo, Saturday night dances, and variety concerts. Over the years several parades have taken place on Highway 4.

In 2001 the following events were added: Preteen dance, teen dance, seniors flea market,
“Closest to the hole” golf game. The first “Heritage Walk” brochure was printed as a part of the annual community festival. During the Heritage Walk the community was divided into sections (ranging from a distance of 2.5 – 3 km each) and members of the community volunteered to use history available on the area, collect old pictures, and to orally capture what is remembered by our elders. The data was collected and then transcribed by the summer student into booklet form. On the day of the walk wooden signs labeled with numbers to coincide with the map in the brochure were posted. Since River Bourgeois has an older population the booklets were designed for those who were unable to walk, to take their cars. The heritage walk was completed in 2009 when all areas of the community were covered.

2003 was the start of our theme festivals where each year we had T-Shirts with the emblem printed on them. The themes over the years have included Lighthouse, St. John the Baptist Church, East End School, Cannes School, Stella Maris School, Boyd’s Store, and the new Cenotaph. 2003 also included the grand opening of the newly built lighthouse and we added the first “Antique Car Show”, the “Teenage Festival Princess Pageant”, and “Children’s Fun Day” (sponsored by the new Youth Development Committee).

In 2007 Canoe Races were added to the festival.
Severe rain storms on Friday night caused some ball teams to cancel as roads
were washed out.

In 2008 the following were added to the festival:
Trivia contest,
45 Card Game,
Steak & Stein

In 2009 the festival included the official opening of the Cenotaph which was opened by the Lt. Governor of NS, the Honorable Maryann Francis. This festival also saw the first annual art show which took place at Boyd’s Warehouse, and the first “Poker Walk”. Hurricane Earl took over the power on Saturday night cancelling our dance.

In 2010 “A salute to Mike MacPhee” took place and the unveiling of the “Home of Mike McPhee” signs and portrait were part of the festivities.

In 2011 River Bourgeois residents decorated their yards with a fisherman theme.

2014 was the 300th Anniversary of River Bourgeois. To celebrate residents re-enacted the landing of the 1714 Acadians. There was a huge crowd of people dressed in period costumes and a re-enactment of the voyage to the shores of River Bourgeois. 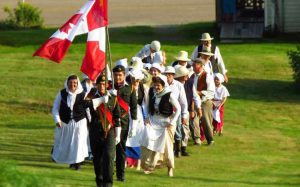 During the re-enactment, some residents rowed to the shores of River Bourgeois to represent the Acadians landing here. From the shores they climbed the hill to the new Cairn monument, where there was a ceremony and unveiling. After the ceremonies everyone met up at the Tara Lynne Centre, to enjoy foods that would have been popular in 1714.